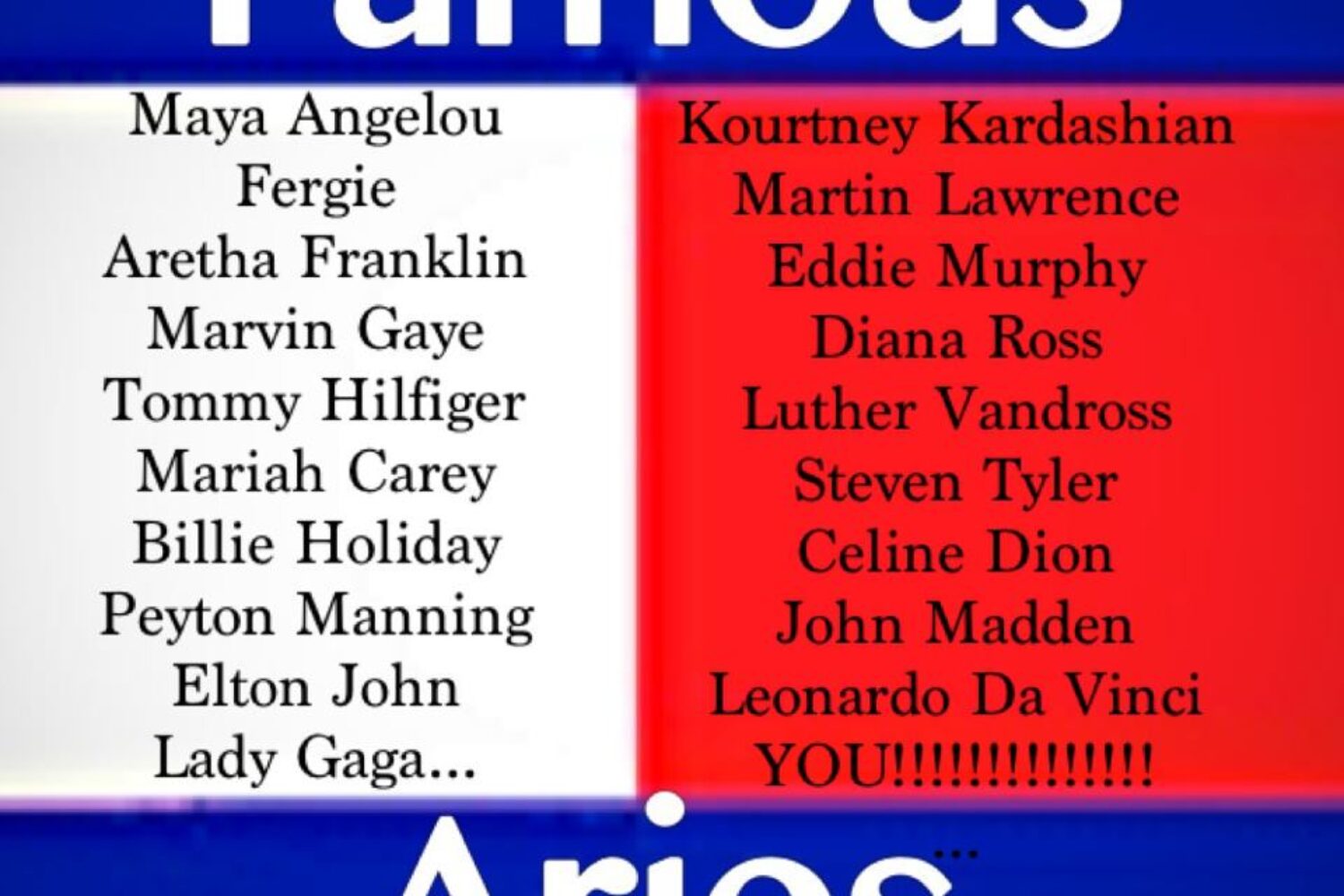 How to Recognize ARIES

“They would not remember the simple rules their friends had taught them: such as
that a red hot poker will burn you if you hold it too long;and that, if you cut your
finger very deeply with a knife, it usually bleeds.
Have you recently met an unusually friendly person with a forceful manner, a firm
handclasp and an instant smile? Get ready for a dizzy dash around the mulberry
bush. You’ve probably just been adopted by an Aries. Especially if you found it a
little tough to take the lead in the conversation.
Is he committed to some idealistic cause and angrily defending the underdog? That
figures. Male or female, these people will fight what they feel is an injustice on the
spot, and they’re not bashful about voicing their opinions. The ram will talk back to
a traffic cop or an armed gangster with equal vigor, if either one happens to annoy
him. He may regret it later, but caution won’t concern him in the heat of the
moment. Mars people come straight to the point, with no shilly-shallying.
Aries is the first sign of the zodiac. It represents birth, as Pisces represents death and
consciousness of the soul. The ram is conscious only of himself. He’s the infant of
the zodiac-the newborn baby-completely absorbed with his own toes and fingers.
His needs come first. An infant doesn’t care whether or not his parents or the
neighbors are sleeping. When he’s hungry or wet, he yowls in discomfort. He wants
his bottle, and he wants his diaper changed now, and don’t be pokey about it. When
the Aries person has an idea or something he wants to get off his mind, he’ll call you
at four in the morning without a qualm. Why shouldn’t you be awake to listen to
him? He’s awake. That’s all that counts. He wants something. He gets it.
Like the infant, Aries is concerned with the world only as it relates to himself. But
who could call the small baby truly selfish? He’s perfectly willing to lavish his
smiles and favors on those who satisfy his demands. It’s hard to resist a baby,
because he’s so totally unaware that he’s causing anyone the slightest inconvenience.
So it is with the ram. His innocence hangs over him and mellows his aggressiveness,

like the innocence of the newborn softens his egocentricity.
This disarming naivete is also why Aries people are so fearless. The baby fears
nothing and no one, until he gets burned. Even then, he’ll trustingly try again, when
he’s forgotten the hurt. There’s not a trace of cunning wile in the ram, and he’ll
remain this way throughout his lifetime; forever believing with all his heart, always
falling down and getting up again to try once more. Any doubts he collects along
the way are immediately displaced by the next person who’s kind to him, just as the
baby forgets the pain of the safety pin that accidentally stuck in his leg the next time
someone sprinkles the powder.

The ram can make believe from here to tomorrow, and spin fabulous dreams, but he
can’t lie worth a tinker.
What you see before you is what he is. There’s nothing hidden or complicated
about him. He’s just as vulnerable as the baby, and just as helpless. When stronger,
more mature people force him or take things away from him, he reacts in the only
manner he knows-yelling and causing so much disturbance, that people give in just
to get peace. He doesn’t need delicate strategy. Lung power and self-absorbed
determination suffice beautifully to allow him to get his way. Perhaps helpless is not
the right word. Vulnerable, yes-but helpless, no.

It’s a cinch to recognize the physical appearance of the ram. Aries people have
decided features, usually sharp, seldom soft or blurred. The well-marked brows
often join with the narrow bridge of the nose in forming the sign of the ram,
perhaps as a warning to anyone with the silly idea of trying to stop or conquer him
that those symbolic horns mean business. You may notice a mole or a scar on the
head or face, a reddish cast to the hair in the sunlight, and more color than average
in the complexion. You may also sense invisible sparks shooting out in all
directions. The movements will usually be quick and capable, with a mental process
to match. Both the male and female rams normally have broad shoulders, and they
may walk with the body slightly bent forward, leading with the head, so to speak,
and almost always in a great hurry. (Often, they’re in a hurry to get to a brick
building to knock down, though their horns may get bent in the butting.) There’s
little that’s graceful about the ram, unless it’s his smooth way of handling a crisis
(which never fails to surprise people who underestimate him). The bone Structure is
fine and strong, and few Aries people slump. Their posture reflects their supreme
ego and self-confidence. If you see an Aries with drooping shoulders, he’s probably
a sheep type, who was badly hurt in the ego when he was young. It may take him
some time to recover, if the wounds went deep, but he’ll straighten up someday. You
can count on it. Nothing keeps these people down forever, failure least of all.
The Mars-ruled person will look you straight in the eye, with unabashed honesty
and rather touching faith. You’re his friend, aren’t you? You like him, don’t you?
No? Then the tears will start, but inside. He’ll never show it on the surface, if he can
help it. If you see him openly weeping, you can be certain that he’s been cut to the
very soul in some way. Aries would rather be caught dead than be caught weak-and
some of them literally risk the former to avoid the latter.

The ram will seldom glance nervously around the room. When he does, he’s no
longer interested in talking with you. Something else has caught his attention, and
for the moment, you are forgotten. So is what you’re saying. Don’t be offended.
Remember the baby and his toes and fingers.
He will undoubtedly be at the head of his chosen career or involved in a profession
on his own. If he’s not, then you can easily recognize him by the discontent he
clearly shows at being forced to submit to others. You can look for a liberal attitude,
lavish generosity with both time and material things, and a marked desire to lead all
the marches -with loud cymbals. But don’t look for subtlety, tact or humility. The
average Arien was behind the barn door when those qualities were passed out. He’s
a little short on patience, too. In a coffee shop, he’ll quickly criticize the waitress
and the sandwich, if the first is fresh and the second is stale. But he’ll probably leave
an unnecessarily big tip when the service is good.

Aries is very direct, to put it mildly. Deceptiveness and deviousness are entirely
foreign to the Mars nature. Frankness and refreshing honesty are Arien trademarks,
yet rams don’t make the best credit risks. Some of them lack stability and evidence a
child-like lack of responsibility. Even those who have matured can forget debts in
the excitement of the ever-present new challenge of the moment, which will always
consume their entire attention. They’ll eventually pay their bills cheerfully and
willingly, but you may be out of breath when you catch up with them.
Although Aries is the firebrand, who forges his way through life with daring,
initiative and enterprise, there’s a strange quirk to his bravery. He’ll face the
abominable snowman or the Frankenstein monster without the slightest trace of
fear, yet he can’t stand physical pain. He’s never a moral coward, but he can be a
huge sissy about anything that hurts. The dentist is not one of his favorite people.
Every Arien, at some time in his life, will indulge in rash behavior that brings an
injury to the head or face. Cuts and bums are also likely, and severe or even
migraine headaches, which could stem from kidney infections. The ram would be
wise to steel himself and see that dentist regularly, guard his eyesight, watch his
diet, treat head colds seriously, and stay away from alcohol (not only bad for the
kidneys, but quite combustible when combined with the Mars temper). Skin rashes,
painful knee caps and stomach disorders also plague those born in late March or
April. The ram’s constitution is strong and tough, if he doesn’t abuse it, which he
usually does, by ignoring it.

When you see him confined to bed with little to say,
you know he’s really sick. Even so, it may require handcuffs to keep him down.
He can survive fevers high enough to kill the average person, and many of them
are brought on by his headstrong Mars tendency to carry through under adverse
circumstances, at the wrong times with the wrong people. The angry impatience
and frustration this always triggers is the real cause of his health problems.

Because of his forceful optimism, Aries (along with the other fire signs, Leo and
Sagittarius) seldom falls victim to the chronic, lingering diseases-which astrology
has always taught and medical science now realizes are triggered or intensified by
melancholy and pessimism. The fire signs are more susceptible to raging fevers,
fulminating infections, strokes, high blood pressure and violently acute illness. Say
what you will about his impulsiveness, the ram is seldom guilty of gloom. The seeds
of depression, even if planted, will die a quick death in Arien soil. But that precious
idea Aries holds, that no one else can do anything as efficiently as he can, may run
away with him and lead to a thousand disasters. He’ll carry through his schemes
with dash and confidence, seldom realizing that he’s overreaching himself and
headed for ulcers or a nervous breakdown. No one ever accuses him of laziness.”

To be continued from Linda Goodman. Taurus is Next!